McGregor Said he Slapped the Head Off Diaz

Conor McGregor told ESPN.com that he wanted the rematch with Nate Diaz be at 170 pounds. 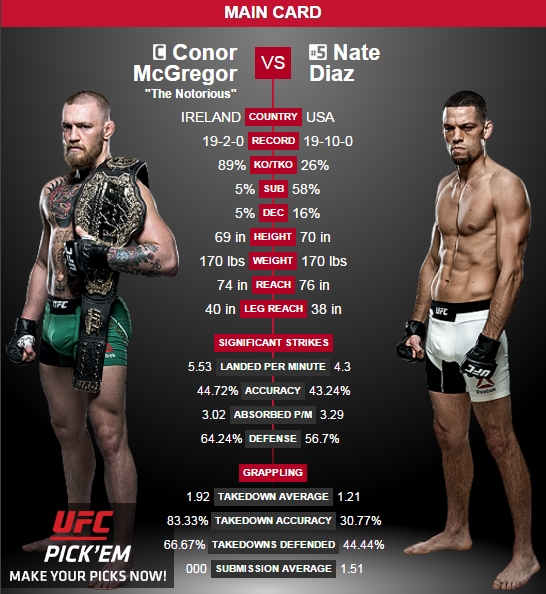 When the fight went from 155 to 170, McGregor stop working with his nutritionist George Lockhart.

“Swinging on gymnastic rings on fight week isn’t the best thing. Usually, I wrap myself in bubble wrap and only do fight-specific things, but just because of that weight, no weight cut, I had put it in my head that, ‘I’m free.’ I had energy to burn. I was doing so much bounce footwork, the balls of my feet were burned to a crisp. Looking back, it was ridiculous. I don’t know what I was thinking.”

“The first eight minutes of the fight was easy,” McGregor said. “Let’s be honest, I slapped the head off him. Once the gas tank went, that was it. I drowned. He landed that one punch that rang the bell and went, ‘[Gasp,] I’m back.’ He was close to being done. One or two more shots and he would have been wrapped up.

“Look at me right now,” McGregor said. “Fish, red cabbage, asparagus — I’m nowhere near a fight ,and I’m on the clock with nutrition.”